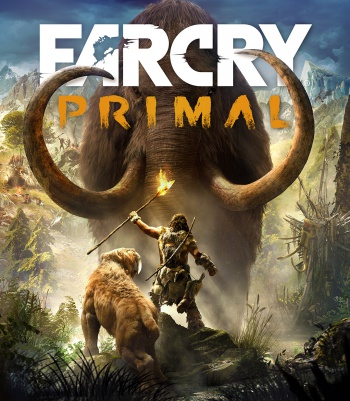 Far Cry: Primal takes players to the Stone Age, where sabretooth tigers and woolly mammoths are among the least of your problems.

Far Cry has a pretty simple formula for each game - drop players into distant, unfamiliar lands to face wild animals and deadly human threats. But last January, Ubisoft considered taking the series in amazingly outrageous directions, some of which included dinosaurs. Now Ubisoft has revealed the next Far Cry game, and dinosaurs sadly aren't included... but many other prehistoric creatures are. Far Cry: Primal heads back to 10,000 BC, when direwolves, sabertooth tigers, and freaking woolly mammoths were very real concerns.

"Stone Age is the perfect setting for a Far Cry game," Ubisoft creative director Jean-Christophe Guyot explained. "Far Cry usually puts you at the edge of the known world, in a beautiful, lawless and savage frontier. The Stone Age is, in a way, the very first frontier for humankind; it's the time when humans put a stick in the ground and claimed land for their own, the time when we started climbing the food chain. That came with conflict, against other humans of course, but also against nature itself."

Far Cry: Primal is set in Oros, a pristine land where humans are absolutely not the dominant species. You play as Takkar, the last surviving member of a hunting party who agrees to help the locals tame the environment. But many obstacles stand in your way, ranging from opposing tribes to enormous direworlves. To survive, Takkar will need to hunt, create fire, and take a stand against the enemies competing for Oros.

Much of Far Cry's recent gameplay will carry over to Primal, including the ability to craft weapons and tools from slain animals. You'll also stalk enemy outposts, develop your tribe, and master fire to expand tactical options. Fire has the benefit of scaring away nighttime predators, for example, but you can also set your weapon ablaze to increase your damage.

Modern vehicles won't be included, of course, but we might have something better - prehistoric animal companions. Far Cry: Primal's box art includes an image of Takkar standing beside a sabertooth tiger while they face a woolly mammoth. If accurate, I can't decide which prospect is more exciting: Befriending tigers, or riding woolly mammoths into battle.

Far Cry: Primal arrives on PS4 and Xbox One this Feb. 23, 2016, and will get a PC release the following March. More details for the game will follow as they become available.