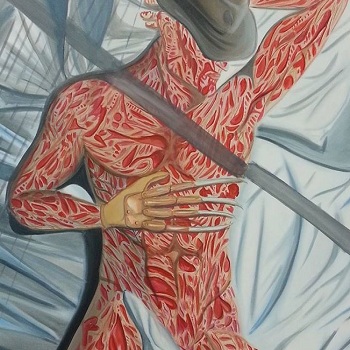 That Krueger, so hot right now.

Now that we've settled once and for all what is the greatest (or at least most successful) horror film franchise of all time, you're probably left wondering only one thing, "Yeah, but what would Jason Voorhees look like in a speedo?"

What's that? You weren't wondering that at all, and in fact think that the mere suggestion of such an image is enough to make you vomit? Well too bad, buster boy!!

That's because London-based artist Karl Von Frankenstein has recently released a series of oil-on-canvas paintings, "Horror Pin-ups", which depict everyone from Voorhees to Freddy Kreuger as hot-bodied Zoolander prototypes. The paintings are creepy, no doubt, but considering that most horror movies are designed to both titillate and terrify you -- to gross out and gratify, if you will -- I can't say that "Seductive Michael Myers" seems all that odd in the grand scheme of things. Why von Frankenstein opted not to paint Marie from Haute Tension, though, I will never understand.

Check out "Horror Pin-ups" in the gallery below, then head over to von Frankenstein's FineArtAmerica page to pick one up (you know, if you're into this sort of thing). I've also gone ahead and included Karl's "Monster Mugshots" series as well, to help your brains recover from the childhood-destroying experience I've just bestowed upon you.