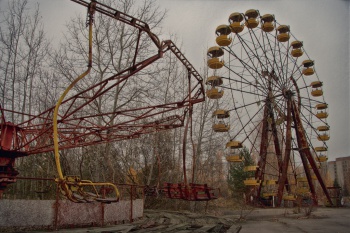 A long-term study of wildlife in the irradiated wasteland of Chernobyl has revealed it has become a haven for animals in the decades since the nuclear disaster.

Have I got a deal for you. It's the vacation of a lifetime! You can stalk the countryside - have a pleasant roadside picnic - explore historic Pripyat - hey, wait, where are you going?

It's been nearly thirty years since the Chernobyl incident - at that time, the worst nuclear disaster in history - brought the dangers of nuclear energy into stark relief. It taught us harsh but needed lessons that we've used to make future reactors safer. It left the surrounding countryside, including the nearby town of Pripyat, empty of almost all life. Anything that stayed, died; everything else - human or otherwise - moved far, far away.

But the Chernobyl area is starting to bounce back, ecologically, little by little. The whole place is still a poisonous wasteland, don't get me wrong. But some animals have been finding the region to be a relatively safe place to live.

Professor Jim Smith of the University of Portsmouth led a long-term census on the populations of wildlife in the affected area. This "does not mean that radiation is good for wildlife," he insists. "It's just that the effects of human habitation, including hunting, farming, and forestry, are a lot worse."

Using remote, automatic cameras and aerial surveys, the researchers tallied the numbers on a number of different large mammal populations, such as roe deer, elk, wolves, and wild boars.

Some photos taken by the cameras along the Ukrainian border with the exclusion zone:

"The numbers of animals we see in Chernobyl is similar to the populations in uncontaminated nature reserves."

This is no nature reserve, however. The exclusion zone, which extends 30 kilometres from the disaster site, is still thick with radiation. The animals living here are likely suffering from it constantly. At the same time, these animals are living in the ruins of a human civilization, now overgrown and taken over by what nature survives. Wild horses make their homes in abandoned barns that once contained their domesticated brethren. Wild boar charge down empty city streets.

It's an unintentional experiment in what can happen when humans very suddenly depart an area, and the results speak for themselves.

Chernobyl hasn't been entirely devoid of life since the incident, it should be noted. The return of mammals may have taken several years, but one lifeform in particular seemed to be born of the fallout - radiotrophic fungi were discovered in 1991 lining the inside of the broken down reactor. It appears as a black mold, and by all accounts seems to be quite content feeding off the radiation itself...

...until it develops a taste for blood.