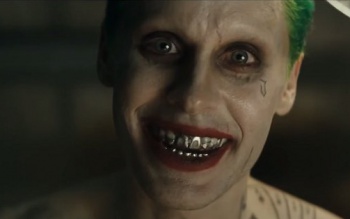 Where did Suicide Squad's Jared Leto go for Joker inspiration? None other than Batman writer Grant Morrison.

When it comes to Batman's greatest villain, there is no shortage of excellent on-screen performances. Jack Nicholson, Heath Ledger, and the legendary Mark Hamill put fantastic spins on the Joker, which raises a question: How will Jared Leto stand out in the upcoming Suicide Squad? We won't know for certain until next year, but we do have one promising detail - Leto consulted Grant Morrison, one of DC Comics biggest names, on how Joker should be portrayed.

"It looks quite interesting." Morrison told Comic Heroes magazine. "He [Leto] called me to talk about his approach to the character and I steered him in a few directions. I'm keen to see if anything other than slicked back hair and the Marilyn Manson vibe made it into his performance."

Why exactly would Leto ask Grant Morrison for advice, you might ask? Outside of being among the most successful superhero writers, Morrison has direct experience working on the Joker. His first graphic novel with DC Comics was Arkham Asylum: A Serious House on Serious Earth, a symbolic deconstruction of Batman and his villains. During his groundbreaking JLA run, Joker was a major villain for the "Rock of Ages" storyline. Finally, Joker made several appearances in Morrison's ongoing Batman series, where he became increasingly deranged (more so than usual) after taking a bullet to the head.

Morrison also shared his thoughts on superhero films overall, believing they've reached a point where they should start taking more risks. "I don't think I've seen any great ones for a while," he explained. "Age of Ultron was solid but naturally not quite the game­changer the first Avengers was. We're all familiar with the meat ­and­ potatoes superhero stuff, so I think it's time they made Miracleman, Enigma, Flex Mentallo or something else that's a bit more challenging."

Could Suicide Squad be that "more challenging" superhero film? It already explores a promising dark side of the DC cinematic universe, where supervillains complete missions for the government to remove jail time from their sentences. If Leto's performance could reinvigorate Joker as well, this just might be a great place to start. Suicide Squad arrives in theaters on Aug. 5, 2016.