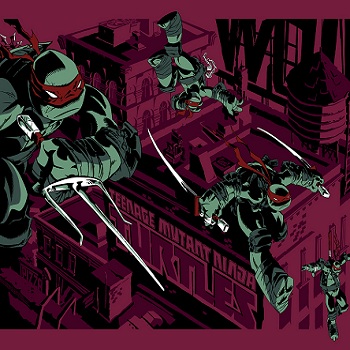 Celebrate one of this year's biggest movie, music and art festivals with these beautiful posters and album covers.

While Comic-Con may get all the mainstream coverage for being the biggest collaboration of all things movie and comic nerd-related (not that there's anything wrong with that), there's actually a festival out of Austin, Texas that's gaining a lot of steam for its, how do you say, geeky aesthetic.

It's called MondoCon, and it just finished wrapping up its second annual two-day celebration over the weekend, with everything from classic movie screenings to collaborative panels and even a career retrospective with legendary illustrator William Stout being held at the Marchesa Theater.

Not familiar with MondoCon? Well, you might be familiar with the company from which it was born. Founded in the early 2000's, Mondo started off as a small shop that sold movie-themed t-shirts in Texas' infamous Alamo Drafthouse theaters. Thanks in no small part to the excellent quality of their goods, Mondo has evolved into a screen printing and pop culture art juggernaut over the years and launched its first convention in the Fall of 2014.

According to the official site, MondoCon is "a celebration of everything we love, including movies, art, comics, music, toys and food. It's a weekend curated with our fans in mind, featuring incredible Artists & Creators from around the world, Panels, Screenings, Food Trucks & Interactive Events."

Featuring a slew of big name genre artists like Francesco Francavilla, Jock, Jason Edmiston, Becky Cloonan, and Mike Mitchell, as well as Mondo regulars like Martin Ansin, Tyler Stout, and Ken Taylor, this year's MondoCon was a smash success, so check out all the exclusive posters released at this year's festival and start planning your trip to Austin for next year's epic celebration right here.