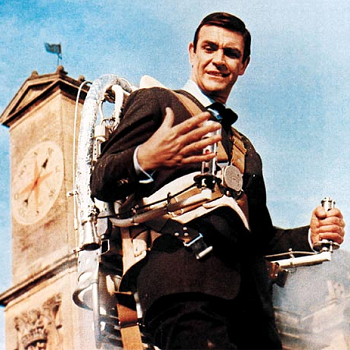 From the jetpack to the explosive keychain, relive the finest of Q's creations.

Over the course of 40+ years, some two dozen films, and a half dozen different leading men donning the role, it would be hard to find a cinematic canon more rife for debate that that of British superspy James Bond. The cars, the women, the villains -- practically every aspect of the saga was essentially created as a platform for devoted fanboys to squabble over on forums across the Internet. Quite the foresight, that Ian Fleming had.

It may still be another month until SPECTRE hits theaters, but lucky for us, UK costume designer/blog MorphSuits recently dropped their list of "The 10 Coolest James Bond Gadgets" to keep us busy in the meantime. And while I personally wouldn't consider any of Bond's cars to be a quote unquote gadget, this list does take me back to some of Bond's defining moments.

Take for instance, the Ericsson, a cell phone-stun gun combination that I still cannot believe wasn't included as a feature in the iPhone 6s.

Think about it, ladies: You're out at the club, and some drunk wanker (British speak for idiot) simply will not relent from your side until he obtains your number. "Let me just buy you one drink!" he keeps shouting, seemingly unaware that you are already holding a vodka martini -- shaken, not stirred of course -- and aren't the least bit interested in him. Rather than cause a scene by enlisting the club's bouncer to remove this man, you simply say, "Why don't you just give me *your* number, and I'll call you?" So drunk guy takes your phone, and as soon as he presses the wrong number...POW!, he goes down in a heap, convulsing and/or possibly foaming at the mouth.

You know what, someone get Tim Cook on the phone. I've got a foolproof pitch for him that is going to completely redefine our understanding of "cybersecurity."

Check out Morphsuit's list in the gallery below, then head over to their blog for more movie and techy listicles to argue over with your friends.