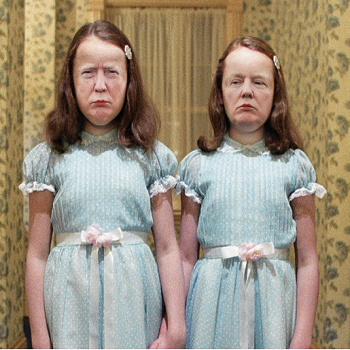 As if the idea of Donald Trump as POTUS wasn't already scary enough.

While admittedly not being very interested in politics, I think the presidential run of hotel mogul-cum-reality star Donald Trump can best be summed up in the words of the Bee Gees...

Now, whether the "I" mentioned in those lyrics refers to Trump himself or America in general is a matter of personal perspective, but in either case, it would be hard to deny the impact that the "Apprentice" star has had on this year's GOP race. He was the driving force behind the record-breaking viewership the second Republican debate received and he's even leading the polls in key swing states like Florida, Ohio, and Pennslyvania. Crazy, right?

But you know, perhaps it's appropriate that Trump is surging up the October polls, given that this is the one month a year devoted to scaring the living bejesus out of each other. Trump is essentially the Michael Myers of immigration reform, if you think about it, and I can only imagine what ghoulish prospects he'll bring to the next Republican debate. Thanks to a brilliantly-inspired photoshop contest over at DesignCrowd, however, we won't have to wait until the end of the month to recoil in horrors that "The Don" hath wrought.

With over 124 entries from 62 designers, "Photoshop Donald Trump into famous horror movie scenes" is an at times hilarious, at times grotesque, but consistently on-the-nose lampooning of the current presidential hopeful. Check out a gallery of our favorite entries below, then head over to DesignCrowd to see more.

And here I thought "Slasher Icons Re-Imagined as Sexy Pin-ups" would be the most terrifying thing I would see all month. Way to go, Internet.

Of course, I'm going to need to see some mock-ups of the Democratic candidates as well to maintain the political objectivity required of all gaming/movie news bloggers, so if someone could photoshop Hillary Clinton into Stephen King's Misery and Bernie Sanders as Crazy Ralph from Friday the 13th, that'd be greaaaat.