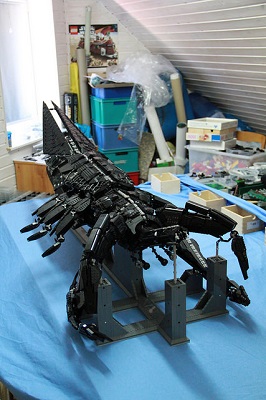 LEGO builder Kevin J. Walter has constructed a huge and detailed recreation of a Reaper from Mass Effect.

For many gamers, the awesome portions of BioWare's first Mass Effect trilogy were, sadly, overshadowed by the way the series came to an end. It's a shame because, even considering their flaws, the Mass Effect games still arguably represents some of the finest sci-fi storytelling the game industry has ever produced. Easily one of the best parts of the games were your foes: the Reapers. Unstoppable killing machines, they were the rare sort of enemy that could strike legitimate fear in a player. When a Reaper showed up you knew things were about to get real.

Recognizing this, LEGO builder Kevin J. Walter recently decided to pay tribute to the Reaper by building one with bricks. Built specifically for 2015's SHIPtember competition, Walter based his design off of Mass Effect 1's big bad, the Reaper Sovereign. While Walter hasn't released any information about how many pieces the finished build contains, he did share that it's 173cm long, 68cm wide and 58 cm tall. For comparison, LEGO's official Super Star Destroyer set is only 124cm long and contains 3,152 pieces.

As is often the case with custom LEGO projects, the truly impressive part of Walter's build is the level of detail he achieves. His Reaper's outer hull is absolutely covered in little bits and pieces that were clearly arranged with care to make it an accurate representation of the villainous ship. You also just have to love the way he re-purposed some of his LEGO pieces. One zoomed in picture, for instance, reveals that an entire section of the ship is just a row of black chairs. Now all we need to do is track down one of the LEGO Normandy builds we've seen in the past and let them duke it. It might sound like an unfair fight but we're willing to bet that Shepard would be able to pull it off somehow. (Even if he/she had to resort to speaking with that bratty Star Child again.)