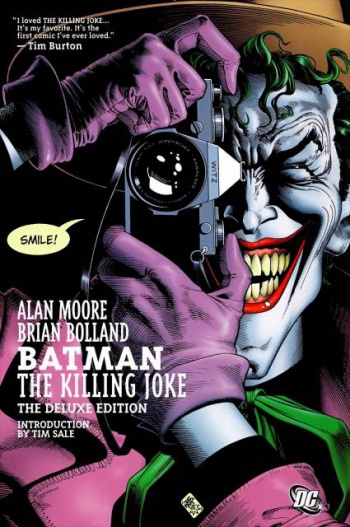 DC Comics has given The Killing Joke's director permission to aim for an R rating if it suits the film.

Of all DC's graphic novels The Killing Joke is among the most popular and controversial. Not only did it craft a highly memorable Joker origin story, it featured one of the darkest events in Batman lore: Batgirl Barbara Gordon being paralyzed and sexually assaulted by Joker. What's surprising is DC seems willing to include this content in The Killing Joke animated movie, even if that means creating DC Entertainment's first R rated film.

According to producer James Tucker, speaking at New York Comic-Con, Warner Bros. gave permission for The Killing Joke to receive an R rating. To be clear, that doesn't mean The Killing Joke will get a mature rating - only that director Sam Liu is free to do so. "What rating it gets won't be decided for a long time," Tucker later confirmed on Twitter.

Here's where we get into interesting territory. On the one hand, The Killing Joke probably can't be adapted faithfully without the R rating - at least not without heavily toning down the violence Barbara experiences. But actually going through with it has commercial implications, since previous DC animated films were marketed to PG-13 audiences. That said, DC's latest films increasingly suggest it wants to explore mature content. The Killing Joke might mark where DC Entertainment throws any PG-13 pretenses aside, at least for its superhero film line. The question the is whether Batman's mature audience is large enough to warrant the shift.

It's an important question, because DC plans to make The Killing Joke whatever the rating turns out to be. It even convinced Mark Hamill to bring back his Joker voice, which he'd retired after Arkham City. What do you think? Would you watch an R rated The Killing Joke, or are DC's animated films getting too dark as it is?