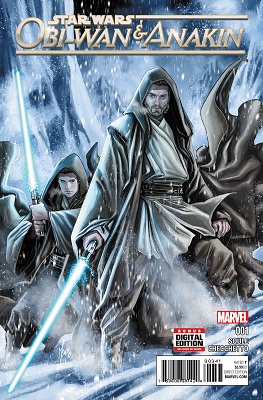 This past weekend at New York Comic Con, Marvel announced its plans to publish another mini-series grounded in the Star Wars universe. Dubbed Obi-Wan & Anakin, the new five issue series will explore the relationship between the titular Jedi earlier than any other current canon products released yet. With the comic set to release next year, series writer Charles Soule recently shared insights into his plan for the book and what he hopes to achieve with this new look at these key characters.

"It's set between Episode I and II, which is one of the big attractions to me about doing the series," said Soule, speaking in an interview. "We've seen the end of The Phantom Menace, which is when Anakin said, 'Yes, I'll go to the Jedi Temple,' and Obi-Wan said, 'Yes, I'll train this kid.' But then, what happened between there and the start of Episode II, where they were buddy-buddy and clearly had lots of adventures? It's pretty unexplored territory." Obi-Wan & Anakin, in turn, will take place just a few years after Anakin's induction into the Jedi Order and focus on the pair as they investigate a "distress call from a planet that's supposed to be completely dead." The mission, according to Soule, will take place at a "pivotal time" in their "master-student relationship" where they'll both begin to question how they relate to one another.

Soule also shared his intention to present the Jedi in a somewhat more enigmatic way than they often have been in recent years. "They're very mysterious," he said. "You don't get into their heads as much, they don't talk as much. Actions speak louder than words, sort of. So, I think that hopefully will be very cool." Combined with a snowy setting and visuals from Shattered Empire artist Marco Checchetto, it's Soule's hope that the series will provide some visually striking moments to impress the franchise's many fans. Suffice it to say, we'll be interested to see how the comic turns out when it hits store shelves in January 2016.