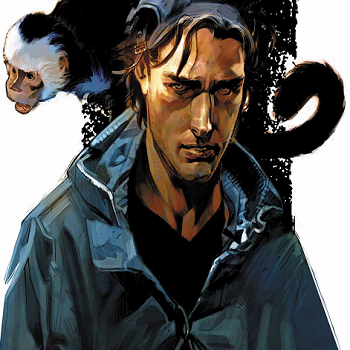 All your graphic novel are belong to TV.

Considered one of the most popular and critically acclaimed comic book series of all time, Y: The Last Man has been rumored to be coming to television (and film) as far back as 2007. At one point, New Line Cinema secured the rights to the series and announced plans to move forward with an adaptation starring Shia Labeouf, but the project never came to light.

Leabouf's attempts to rally New Line into action fell on deaf ears, it would seem.

According to a recent story by The Hollywood Reporter, however, it appears as if a show about the last man on Earth *not* starring Will Forte might finally be headed to our living rooms, courtesy of FX.

"FX is teaming with (series creator Brian K.) Vaughan and Color Force's Nina Jacobson and Brad Simpson to develop the dystopian sci-fi comic as an ongoing series. A search is under way to find a writer to develop the series with Vaughan, writes the Reporter.

"A director for the potential series has not yet been determined. Y: The Last Man, which is purely in development at this time, will be produced by FX and FX Productions.

Vaughn, who previously helped develop the critically divisive adaptation of Stephen King's Under the Dome over at CBS (and subsequently departed after the first season), is currently penning Image Comics' Saga.

For those of you who aren't familiar, Y: The Last Man is a graphic novel series first published in 2002 that tells the story of Yorick Brown, an amateur escape artist who survives a plague which wipes out all other male mammals on Earth except for his pet monkey. (Think 28 Days Later meets Ace Ventura but with no zombies and less talking out of one's ass, more or less.)

The somewhat outlandish (but increasingly popular) plot aside, it's not difficult to see why FX is jumping all over Vaughan's beloved series, given the success that graphic novels have been receiving on the small screen in recent years. The Walking Dead is still outperforming mother-loving professional football in key demographics on Sunday nights, and that's even including the slight dip this season's premiere received. Likewise, AMC's Walking Dead spinoff, Fear he Walking Dead, enjoyed the highest ratings of any first season cable show *ever* despite being almost unanimously described as "meh" by critics and fans alike.

AMC's other *other* show based off a graphic novel, Preacher, is likely to be a ratings success as well, so it looks like FX will have a huge hit on their hands as well if they are able to execute The Last Man with even slight competence. That being said, who would you guys like to see at the helm of this massive undertaking?