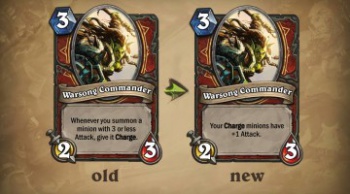 For an online card game, Hearthstone receives a surprisingly small amount of balance changes, with Blizzard opting to try and balance the game by introducing new cards instead of changing older ones. Sometimes, however, it does have to step in and do something, as is the case with the incredibly popular, incredibly cheap Patron Warrior deck that we wrote about in our cheap Hearthstone deck guide. The deck has been absolutely dominating in both tournaments and ranked play, and is built around the idea of one-hit KOing an opponent using a combination of Grim Patron, Frothing Berserker, Warsong Commander, and area damage spells like Whirlwind.

Today, Blizzard has announced an upcoming nerf to Warsong Commander that will completely kill the deck as we know it. The current card text for Warsong Commander gives "charge" to any minion with 3 or less attack that you summon, while the new text simply reads "Your Charge minions have +1 Attack," essentially making it a slightly worse Raid Leader.

"In the case of Warsong Commander, we felt this change was necessary to help expand both future design space and to stand by our overarching game philosophy that battles between minions and fighting for board control is what makes Hearthstone fun and compelling," wrote Blizzard in an official blog post.

Game designer Ben Brode later clarified in a special Designer Insights YouTube video that the nerf was doled out to Warsong Commander specifically, as charge minions are quite hard to balance, and her current card effect made it difficult to introduce interesting new minions with an attack of 3 or less.

The nerf is currently slated for some time next week, so you better hurry up and get everyone in here with your Patron deck before then.