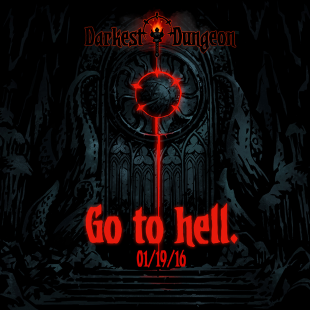 The full release version of Darkest Dungeon will be available for purchase on PC and Mac on January 19th, 2016.

Impressing gamers pretty much from the moment it hit Steam Early Access, Red Hook Studio's Darkest Dungeon has had countless players hooked on its bleak, madness-filled take on dungeon crawling. And while the in-progress game has been more than enough some, many fans have been waiting with baited breath for its developers to deliver the long-promised final version. Happily, it now seems they won't have to wait much longer.

In an announcement posted yesterday to the game's official website, Red Hook revealed that the full release version of Darkest Dungeon will finally arrive on January 19th, 2016. The team had intended to release the game before the end of 2015, but found its plans delayed by the tragic death of director/artist Chris Bourassa's father-in-law. Since "each person's job is highly specialized" the small studio was forced to postpone while Bourassa was "out of action." That being the case, Red Hook will continue to update the Early Access version in the run up to its final release and already has plans to add a new "Abomination" class via a patch which should arrive this November. The final version will initially release on PC and Mac, with plans for PS4 and Vita sometime after.

And just speaking personally, I couldn't be more excited for it. While I've yet to sample the Early Access game. I've had my eye on Darkest Dungeon ever since Escapist EIC Josh Vanderwall wrote about it back in July. With my backlog finally starting to dwindle down a bit, I might actually be in a position to buy and play it in January without the guilt of my unfinished games hanging over my head. How about you guys? Will you be diving into Darkest Dungeon next year or are you do have yourself saved for something else?