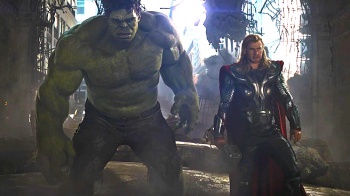 The upcoming Thor: Ragnarok will see Thor teaming up with The Hulk for adventures and hi-jinks.

Thor: Ragnarok is the upcoming third Thor movie in Marvel's "Phase 3" release schedule, currently slated for a November 3, 2017 release date. But what if I told you it wasn't just starring Chris Hemsworth's Thor, but also Mark Ruffalo's The Hulk? That's exactly what Variety is reporting, claiming that Ruffalo is in final negotiations to reprise his role in the upcoming film.

While Hulk fans are no doubt upset that the green giant hasn't gotten a stand-alone flick since Edward Norton's The Incredible Hulk back in 2008, having him star alongside Thor in a kind of "buddy flick" is the next best thing.

Current rumors suggest that Thor: Ragnarok's plot features a "cosmic road trip" with Thor and Hulk that will also see the Asgardian characters Valkyrie and the Enchantress making their big-screen debuts.

Tom Hiddleston and Jaimie Alexander will return to the roles of Loki and Sif respectively for the movie, which was written by Christopher Yost and Craig Kyle, co-writers on Thor: The Dark World.

It seems odd to throw the Hulk in with Thor for this one, but we'll just have to wait and see how it turns out. Who knows, it may even be a set-up for the fan-favorite Planet Hulk storyline?