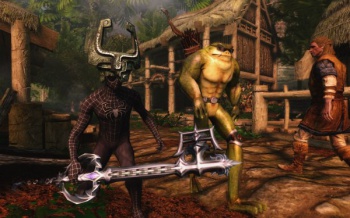 Despite the whole Skyrim fiasco, Valve is determined to make paid mods work.

If you're a citizen of the internet, you'll remember earlier in the year when Valve announced paid mods for Skyrim... and after a rather, intense, backlash from fans, scrapped the initiative shortly after. Needless to say that the experience should have been enough to bury the very concept of "paid mods" completely... but Valve is adamant on making them work.

Talking with Kotaku, Valve admitted that trying to shoehorn paid mods onto a game with a pre-existing mod community was a big mistake. "While it wasn't our intent, it was really easy to read [paid Skyrim mods] as, 'Remember that thing you love? You pay money for that now.' That's an awful plan. That's a terrible plan," mused Valve business authority Erik Johnson.

The next time around (as there will most certainly be a next time around), Valve will make sure paid mods make their debut with the game's launch. "I don't think it matters whether it's a game of ours or not," said Johnson, "but I do agree that walking into a pre-existing, very mature community is probably not the best place to start."

"You need something that's like, 'Here's the new thing. Somebody spent a couple years on it, and it's amazing. It's for sale.' We didn't really have anything like that [last time], so it came across poorly."

Johnson pointed to the success of paid user-created content in Valve titles like Counter-Strike: Global Offensive and Team Fortress 2 as the main reason why it is intent on making paid mods work.

As for me, while my heart bleeds for mod creators who have to make mods for free, "free mods" are one of the greatest things of being a PC gamer, and the day that those are taken away will be a sad day indeed.