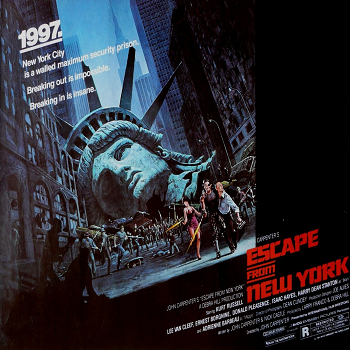 Sad story. You got a smoke?

In any case, we've seen the end result of derivative storytelling time and time again, and not just in twin films like A Bug's Life and Antz or Tombstone and Wyatt Earp. The Asylum has built its empire by standing on the shoulders of geniouses (and simultaneously stealing their ideas), and even original, groundbreaking films like Inception have been accused of ripping off lesser known fare. But how often can a filmmaker prove outright that he was plagiarised, especially when the courts are brought into it?

The answer: At least once, if you're John Carpenter.

You might recall that director Luc Besson (he of The Fifth Element and Taken fame, among many others) released a sci-fi action flick called Lockout back in 2012, starring Guy Pearce as an unjustly convicted prisoner who is offered a chance at freedom if he can rescue the president's daughter from a prison in outer space. The film was a financial flop, but perhaps more importantly, bared a striking resemblance to Carpenter's 1981 cult classic Escape From New York, wherein Kurt Russell was tasked with rescuing the President of the United States from a dystopic prison in Manhattan.

Carpenter took Besson to court -- and more specifically, French court -- to argue the similarities between the films, and believe it or not, he actually won his case. (via Observatoire européen de l'audiovisuel):

The court nevertheless noted many similarities between the two science-fiction films: both presented an athletic, rebellious and cynical hero sentenced to a period of isolated incarceration -despite his heroic past- who is given the offer of setting out to free the President of the United States or his daughter held hostage in exchange for his freedom; he manages, undetected, to get inside the place where the hostage is being held after a flight in a glider/space shuttle, and finds there a former associate who dies; he pulls off the mission in extremis, and at the end of the film keeps the secret documents recovered in the course of the mission.

The court held that the combination of these elements, which gave the film [Escape from New York] its particular appearance and originality, had been reproduced in 'Lock-Out', apart from certain scenes and specific details that were only present in the first film. The difference in the location of the action and the more modern character featured in 'Lock-Out' was not enough to differentiate the two films.

Why would Carpenter be so irked about a 30-year old movie of his being ripped off? Well, because Carpenter happens to currently be executive producing a remake of Escape From New York for 20th Century Fox. (Like I said, originality in Hollywood is a dying concept.)

Besson's production company, Europacorp, was ordered to pay 50,000 Euros to the rights owner, 20,000 to Carpenter and 10,000 to his co-screenwriter, Nick Castle, as a result of the ruling. But personally, I just hope for Besson's sake that no one attempts to call him out for ripping off every female-centric action movie ever with Columbiana.