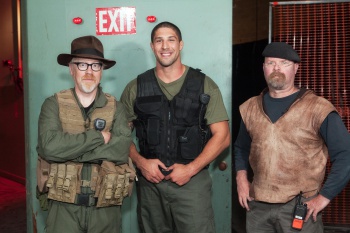 The Mythbusters will bust their last myth in 2016.

It's official: the legendary Mythbusting duo of Adam Savage and Jamie Hyneman will bust their last myth next year. The Discovery Channel has announced that Season 14 of Mythbusters, set to premiere on January 9, 2016, will be its last. While it certainly is very sad to see such a long-time staple of nerd culture disappear, the good news is, in an interview with Entertainment Weekly, the dynamic duo explain that they knew the end was coming, and have planned to go out with a bang.

"It was my greatest fear that Mythbusters would just stop and we wouldn't be able to do proper final episodes," said Savage. "So whether it's myths about human behavior or car stories or explosion stories, we tried to find the most awesome example of each category and build on our past history."

Additionally, Hyneman and Savage are going back on the road for one last Mythbusters Live tour starting next month, and both expect it might be their final time working together. It's no secret that despite their on-screen chemistry, the pair are not exactly... fond of each other, and have had many a creative difference in the past.

Be sure to read the full EW interview for some insights from Savage and Hyneman about the show's legacy. The one thing that they do actually agree on is that Mythbusters has inspired generations of viewers of all ages to become interested in science.

What do you guys think about this? Personally, I'm really sad to see it go, but that said, it's better to go out with a bang than fade into mediocrity like a certain yellow-skinned cartoon family...