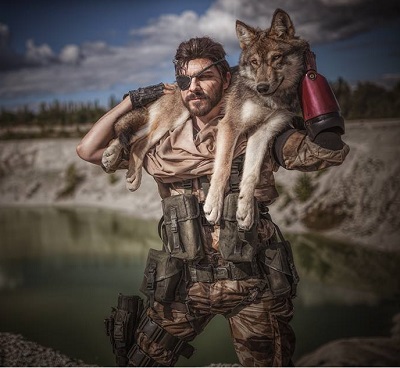 A recent Metal Gear Solid V-themed photo shoot made use of a rather lupine accessory.

When it comes cosplay, one of the biggest goals that many artists and performers aspire to is authenticity. It's not just enough to make a good costume. You have to embody the character you're portraying and, as much as a person can, become them. It's a task that can be daunting and one where even the smallest of edges can make a world of difference. We're going to go ahead and say that bringing a live wolf to a shoot might qualify as such an edge.

Hoping to make their Metal Gear Solid V shoot as close to source as possible, cosplayer Maja Felicitas along with the fine folks at Maul Cosplay recently did just that. Enlisting the help of the animal trainers at Filmwolf Lobine, the cosplayers were able to capture some fantastic images focused on Big Boss, the sniper Quiet and Snake's canine companion D-Dog. Granted, this version of D-Dog has both of his eyes, which does make the portrayal a bit inaccurate. Then again, it's a real freaking wolf so you'd really have to be nitpicking to complain.

The big question, of course, is how do you up the ante after you bring a live wolf into the mix? In the case of a series like Metal Gear Solid the obvious answer would be giant robots but, sadly, those are somewhat in short supply. Who knows, maybe in a few years we'll have a few more of those lying around to satisfy our epic cosplay needs. Until then, we'll be happy with wolves.