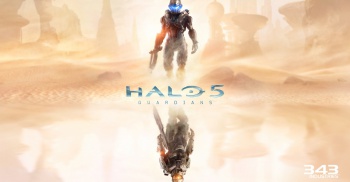 "Plenty of Chance" of Halo 5: Guardians coming to PC, according to Halo's franchise director.

Frank O'Connor, Halo's franchise director, appeared on a live stream with GamesRadar and, when asked if there is a chance of Halo 5: Guardians coming to the PC, stated that there is "plenty of chance."

"Microsoft has made a huge commitment to try to sort of, I think, normalise the Windows experience across multiple platforms, so you're seeing the elements of Windows 10 are going to appear on the Xbox and Cortana and stuff like that. There is plenty of chance that Halo 5 could appear on the PC," O'Connor said. "It wouldn't be the hardest thing in the world to move it to PC and to take advantage of PC stuff."

Although he specified that there is no official announcement at this point, O'Connor stated that it's "absolutely not out of the bounds of reason."

In other Halo 5: Guardians news, 343 Industries recently released the title's gameplay launch trailer, which offers just under three minutes of action and hype.

Halo 5: Guardians releases on October 27 on Xbox One, and will feature Warzone, a new multiplayer mode that supports up to 24 players and includes AI controlled adversaries and maps "up to four times the size" of any former Halo map.