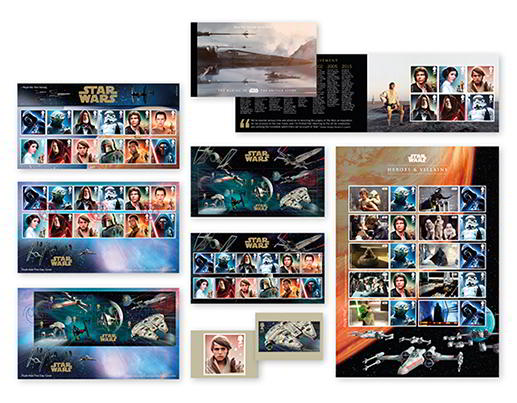 Keep on rolling out the promotional materials and collectibles for Star Wars: The Force Awakens. This time its the Royal Mail in the United Kingdom with some Star Wars commemorative stamps.

Star Wars: The Force Awakens is getting closer to its Dec. 18 release. We already saw the full trailer for the new movie set in a galaxy far, far away, but now you can get some new stamps in case you want to send mail to a friend on Tatooine.

The Royal Mail has released a new set of 18 commemorative stamps for the J.J. Abrams film, including newcomers to the universe, Finn, Rey and Kylo Ren. There are also the older heroes such as Leia, Han and Luke as well. The stamps have been available for pre-order in the U.K. since September, but are now finally out.

In addition to the heroes and villains, there are also vehicle stamps featuring T.I.E. Fighters and X-Wing craft.

Unfortunately, if you don't live in the U.K., the only way you will be able to get these is to order them from the Royal Mail web site, where they are being touted as "the best stamps in the galaxy." In addition to the individual stamps, the Royal Mail is also offering several packages for the collector ranging from £5 to £63.

There is no equivalent from the U.S. Postal Service, at least not yet. That could change before the movie is released. Of course, the USPS did release some commemorative stamps in May 2007 to celebrate the 30th anniversary of the original film.

Check out the gallery of the available stamps.