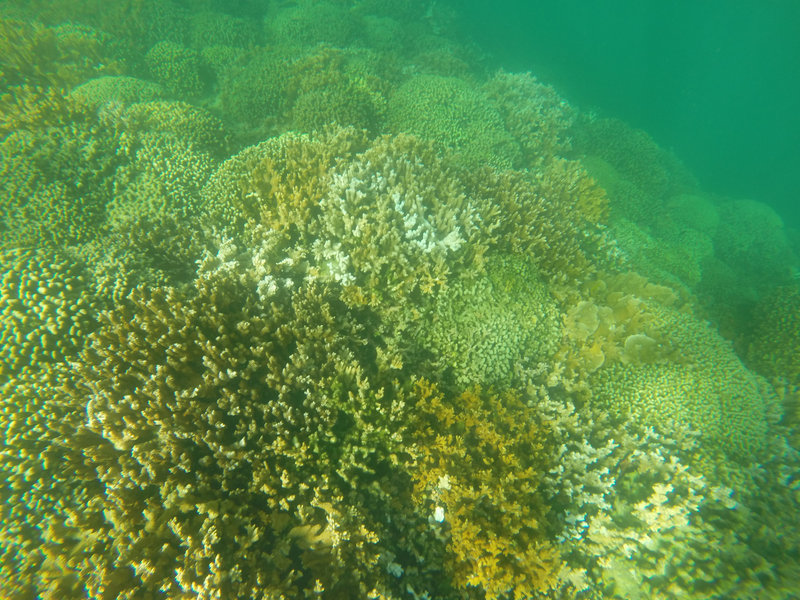 If you like to pile on the sunscreen at the beach to protect yourself against cancer, a new study says you should think twice about going into the water with it on.

Putting sunscreen on at the beach is as necessary as staying hydrated and cleaning up after yourself before you leave, unless you are into the pain of sunburn. But if you use sunscreen, read on about the potential ramifications of going into the surf.

A new study released earlier this week suggests that even one drop of sunscreen could hurt the coral reefs. With that in mind, the study says that more than 14,000 tons of the stuff wind up in the reefs of the world each year. Well, just the ingredient oxybenzone is the problem.

"The use of oxybenzone-containing products needs to be seriously deliberated in islands and areas where coral reef conservation is a critical issue," said team leader and co-author of the report Craig Downs, executive director and researcher of the non-profit scientific organization Haereticus Environmental Laboratory in Virginia. "We have lost at least 80 percent of the coral reefs in the Caribbean. Any small effort to reduce oxybenzone pollution could mean that a coral reef survives a long, hot summer, or that a degraded area recovers. Everyone wants to build coral nurseries for reef restoration, but this will achieve little if the factors that originally killed off the reef remain or intensify in the environment."

Apparently, the oxybenzone not only kills coral, but can deform the DNA of the creature so that it cannot form properly.

The study happened as a coincidence, when several members of the team met at Trunk Bay in the Caribbean, and a local merchant told them that tourists left behind "a long oil slick."

And the beach is not the only way that sunscreen gets into the oceans. "The most direct evidence we have is from beaches with a large amount of people in the water," John Fauth, an associate professor of biology at the University of Central Florida in Orlando and member of the international team, told the Washington Post. "But another way is through the wastewater streams. People come inside and step into the shower. People forget it goes somewhere."

Most popular brands of sunscreen include oxybenzone, but there are several products that work just as well without the damaging ingredient. The non-profit organization Environmental Working Group provides a list of non-offending products.

"This study raises our awareness of a seldom-realized threat to the health of our reef life ... chemicals in the sunscreen products visitors and residents wear are toxic to young corals," said Pat Lindquist, executive director of the Napili Bay and Beach Foundation in Maui. "This knowledge is critical to us as we consider actions to mitigate threats or improve on current practices."

Source: Archives of Environmental Contamination and Toxicology, via The Washington Post and University of Central Florida