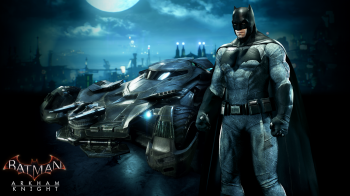 Batman: Arkham Knight's woeful PC port will go on sale once again by the end of this month.

I have some good news for you incredibly paitent Batman: Arkham Knight PC gaming fans: the game's woeful PC port, which was so broken back in June that it was pulled from sale, finally has an official re-release date... three months later. The PC version of Arkham Knight will return to both digital and physical stores on October 28.

"At 10 am PDT, Oct. 28th, Batman: Arkham Knight will be re-released for the PC platform. At the same time we'll also be releasing a patch that brings the PC version fully up-to-date with content that has been released for console (with the exception of console exclusives)," wrote Warner Bros in a blog post.

Last we heard, a rather substantial patch had been released, which seemed to fix a lot of the problems gamers had, although there were still quite a few glitches and oddities remaining. We're assuming that this final patch will aim to tidy those up.

It's been a long time coming and frankly, given the scale of the initial fuck-up, WB and Rocksteady have done the absolute bare minimum. It took them way too long to fix it, and their communication with the community was absolutely shocking, and now that it's finally here, there's no sort of token of gratitude for the dedicated PC fans who stood by them (say... a free season pass?)