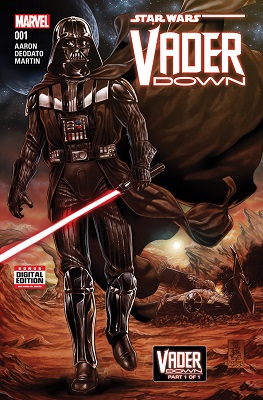 Star Wars: Vader Down will launch with an extra-size comic on November 18th.

Marvel has had some considerable success with its new line of Star Wars books since it reclaimed the franchise from Dark Horse last year. It should serve as no surprise, in turn, that the comic publisher has made big efforts to expand its Star Wars with series and mini-series based around fan favorite characters from the famous universe. This November, Marvel will further this with its first new Star Wars crossover event: Vader Down.

Written by Jason Aaron (Star Wars) and Kieron Gillen (Darth Vader), Vader Down will focus on Darth Vader after he's been shot down by Rebel fighters. Hoping to put an end to the villain once and for all, the Alliance brings the entirety of their military might against him. "Outgunned" and forced into a rare moment of disadvantage, Vader will unleash "the true unrestrained power of the Dark Side of the Force." The crossover will begin on November 18th in the extra long comic Star Wars: Vader Down issue one. After that the story will continue in the regular monthly releases of Star Wars and Darth Vader.

Just speaking personally, I'll admit to being excited for Vader Down. While I do generally prefer Darth Vader portrayed more subtly, I still enjoy it when writers let the character enjoy the occasional moment of bombast. Aaron and Gillen have both done that very well in their respective Star Wars books and I have every confidence that, working together, they'll be able to create a fun story that further expands on the current canon tale of Darth Vader and his war with the Rebel Alliance. What do you think? Does Vader Down sound like something you'll be reading or is it not the comic the you're looking for? (Move along.)