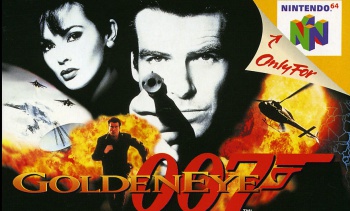 Former Rare producer Martin Hollis has revealed some of the changes Shigeru Miyamoto suggested for Goldeneye 007.

During a talk at GameCity festival in Nottingham over the weekend, former Rare producer Martin Hollis revealed some of the advice his team received from Shigeru Miyamoto during the final stages of Goldeneye 007 development, The Guardian reports.

Miyamoto, who rose to fame for his work on some of Nintendo's most family friendly, and critically acclaimed, franchises - including Donkey Kong, Mario, and The Legend of Zelda - was worried that Goldeneye 007 was too violent.

The game, according to Hollis, had already cut back on the graphics, saying, "Bond is a violent franchise and making that fit with Nintendo, which is very much family-friendly, was a challenge. For a while we had some gore, it was just a flipbook of about 40 textures, beautifully rendered gore that would explode out. When I saw it the first time, I thought it was awesome, it was a fountain of blood, like that moment in the Shining when the lift doors open. Then I thought, hmm, this might be a bit too much red."

He then stated that the team received a series of suggestions via fax from Miyamoto.

"One point was that there was too much close-up killing - he found it a bit too horrible," Hollis recalled. "I don't think I did anything with that input. The second point was, he felt the game was too tragic, with all the killing. He suggested that it might be nice if, at the end of the game, you got to shake hands with all your enemies in the hospital."

The team compromised by adding a credit sequence, stressing that the game is a work of fiction. "It was very filmic, and the key thing was, it underlined that this was artifice. The sequence told people that this was not real killing."