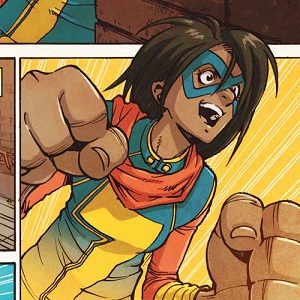 One of the most delightful comics to come out of Marvel over the past few years has been G. Willow Wilson's Ms. Marvel. Following the adventures of the super-powered teenager Kamala Khan, it's impressed readers with its funny and authentic writing as well as its rare focus on a female Muslim superhero. Just like the rest of Marvel's line-up, Ms. Marvel came to an end with the launch of the still winding down Secret Wars event. That being the case, the comics publisher has long had plans to bring the fan favorite heroine back and expand on her adventures by making her an Avenger.

Hoping to give fans a peek at Kamala's new life as a member of the Marvel Universe's premier hero team, the company has released a pair of preview pages from the debut issue of the series' upcoming re-launch. While the pages provide little more than a sneak peek at the new comic, they nonetheless make it clear that fighting alongside the likes of Iron Man, Captain America and (Ultimate) Spider-Man, is pretty much a dream come true. "So once upon a time the world almost came to an end," she says on one page. "But instead of crashing down in a fiery apocalypse it simply got more awesome."

That Kamala would be so excited about being an Avenger should serve as little surprise to fans of the series. A rampant follower of all things superhero even before she received her own powers, a large part of her charm as a character was that she was just as much of a fan as the readers themselves. Ms. Marvel issue one will be hitting comic store shelves next month on November 18th. As with the pre-Secret Wars series, writer G. Willow Wilson will be manning the helm. Takeshi Miyazaw and Adrian Alphona will also be returning to handle the art. In other words, we can probably expect a whole bunch more of the same excellence that readers fell in love with back before Secret Wars flipped everything on its head.