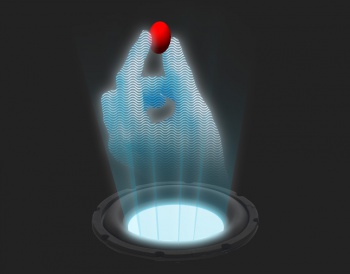 Tractor beams are a sci-fi staple. It's as though you can't buy a spaceship in the future without it coming pre-equipped with a built-in tractor beam, for bringing in pesky rebel vessels or dangerous alien objects. It is, perhaps, an over-used plot device - and yet it's one that today's scientists haven't been able to replicate, until now.

Researchers from the Universities of Bristol and Sussex, along with collaborators Ultrahaptics, have built an honest-to-goodness tractor beam, using sonic waves to lift, pull, and manipulate objects in the air.

Published in Nature Communications, the scientists involved in the project foresee a number of different uses for the sci-fi tech. One could use these beams to move and assemble fine, delicate objects on an assembly line; you could transport drug capsules, or microsurgical equipment through blood vessels.

Anyone who has stood next to a loudspeaker at a concert, or placed sand on one, can tell you that sound waves are easily capable of moving physical objects. Bruce Drinkwater, Professor of Ultrasonics in the University of Bristol's Department of Mechanical Engineering, explains what makes this technology so much more impressive: "We all know that sound waves can have a physical effect. But here we have managed to control the sound to a degree never previously achieved."

Indeed, you can catch a video at Phys.org of one such item being moved to and fro, contained within a hand of sound.

One possible area in which the admittedly incredible technology cannot be used, it seems, is in the theatre that spawned the idea in the first place: space. Sound has no means to propagate in a vacuum, so the dream of using one of these sonic tractor beams to capture objects out in the black is a no-go, for now.

That won't stop the dreaming, though! Life imitates art, after all, and we've already got our monkey borg - tractor beams are surely next on somebody's list.