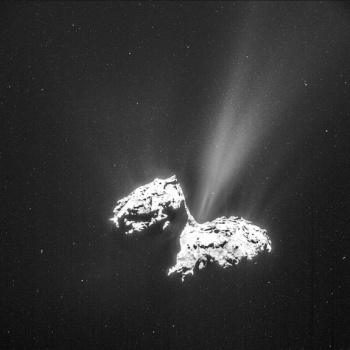 The Rosetta probe, currently studying comet 67P/Churyumov-Gerasimenko, has made a curious discovery - the ancient space debris is spewing oxygen into space.

Astronauts are always telling you, "don't take off your helmet in space!" or "there's no air up there, you can't breathe!" Well, research revealed recently suggests those overly cautious safety mongers are entirely wrong. It's time to take off our fishbowls and breathe in that crisp outer space air! [Note: they are not wrong at all, please wear a helmet and carry oxygen in space.]

The Rosetta probe, sent to study comet 67P/Churyumov-Gerasimenko, has been sending back fascinating data for several months now. Its most surprising discovery, however, may be its most recent: the ancient piece of space debris, mostly comprised of ice and rock, is venting oxygen molecules into the depths of space.

"It was a big surprise to actually detect the O2," says Andre Bieler, who co-led the study concerning the comet's trail of gas. Bieler and his co-author Kathrin Altwegg are now scanning the 1986 records of Halley's Comet, seeing if molecular oxygen was detected at the time. Halley's Comet is the only other comet to get anything like 67P's up-close treatment.

Check out a little gallery of Rosetta's comet below (courtesy of Space.com), and catch up on the Escapist's coverage of the probe and its Philae lander here.

The finding of oxygen really reshapes much of the thinking surrounding the early solar system. Astronomers had long believed that O2, which is highly reactive with hydrogen, would have been obliterated long before 67P ever formed - more than 4.5 billion years ago.

Now, if you'll excuse me I'm going to take a quick space walk and breathe in some fresh comet-spewed oxygen. [Note: again, please do not do this, you will freeze or boil or asphyxiate.]