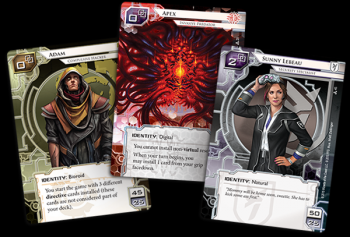 The latest "big box" expansion for Android: Netrunner has been released, adding three new "mini-factions" to the game's Runners.

The worlds of Android: Netrunner got a little bit bigger today, with the official release of the card game's latest "big box" expansion, Data and Destiny. Each of these larger add-ons focuses on one of the game's mega-corporations (or Corps), and one hacker (or Runner) faction. DnD (yes, I know), however, changes the formula a little bit by adding three new "mini-factions" for the Runners, rather than supplementing any of the pre-existing ones.

For those unfamiliar with the asymmetrical, cyberpunk heist game, check out the summary in our last preview here. For fans, though, the three new Runners, each of them a philosophy unto themselves and separate from the traditional Shapers, Criminals, and Anarchs, are going to add a lot of interesting flavor and gameplay.

First up is Adam, an escaped android whose cards take inspiration from Isaac Asimov's laws of robotics, each of which both inhibit and empower the robot runner. Each time a player takes Adam for a spin, the game can end in one of two ways - either the android sloughs off their restrictive programming, becoming an unpredictable and unstoppable force in the process, or he leverages the power his built-in morals give him to create an efficient (if compulsive) hacker.


(All images are from Fantasy Flight Games)


Next is Apex, a mysterious digital entity wreaking havoc on the net. Consuming all the data it comes across, Apex's origins are left intentionally vague - was it once an organic Runner, lost to the world? Or is it a creation of the game's megacorporations, out of control and now trying to bring about an apocalypse?

Finally, we have Sunny Lebeau, a corporate-sponsored white hat hacker. Unlike the game's other Runners, Sunny works entirely within the law, running security checks for the big Corps, or perhaps breaching the servers of corrupt organizations. When she isn't kicking digital butt, she's raising two kids while her partner runs the long-haul to Mars.

DnD also adds a wealth of new cards to the NBN faction, broadening that Corp's options more than it strengthens the ubiquitous "fast-advance" strategy.

Personally, I can't wait to see what decks people build with these new characters. Apex and Adam seem almost too strange to work - and yet I'll rue the day I see them across the table. Meanwhile, I already have a Spark Agency deck ready to go. If there's any Netrunner fans here at the Escapist, post decklists in the comments!