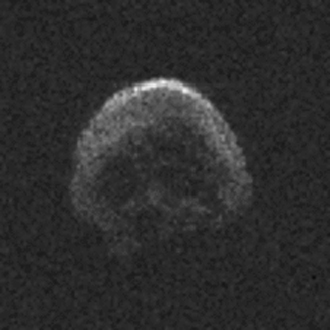 NASA has determined that the celestial object, which will pass safely by the Earth, is most likely a dead comet.

Your Halloween skies just got a little bit spookier: NASA says that tonight a dead comet, shaped like a skull, is due to pass just outside the moon's orbit.

How can you tell when a comet is dead, let alone a comet at all? Vishnu Reddy, at the Planetary Science Institute, explains: "We found that the object reflects about six percent of the light it receives from the sun... that suggests it could be cometary in origin - but as there is no coma evident, the conclusion is it is a dead comet."

The "coma" that Reddy refers to is the vaporous cloud that surrounds most comets, giving them a "fuzzy" appearance. The Halloween object is likely all out of substances that sublimate when it approaches the sun, thus the moniker of a "dead comet."

Those of us in North America will have a hard time actually viewing the skull-shaped visitor - it will be closest to Earth shortly after lunch, Eastern time - but you can follow its progress all the same through NASA's websites.

So for those of you looking for a last-minute costume idea with access to a lot of quick-drying papier maché, there you have it: spooky comet!