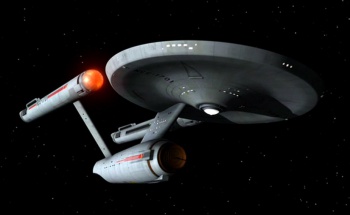 Long before Star Trek was a JJ Abrams franchise starring Chris Pine, Zachary Quinto, and lens flare, it made its home on American television sets. The original series - which debuted in 1966 - was deeply influential to science-fiction and the development of actual science, prompting multiple spin-offs that were classics in their own right. Sadly, we haven't seen a Star Trek TV series since 2005's Enterprise, but the times might finally be changing. Producer Alex Kurtzman will relaunch the series on CBS All Access in January 2017, just a few months after Star Trek's 50th anniversary.

"There is no better time to give Star Trek fans a new series than on the heels of the original show's 50th anniversary celebration," President of CBS Television Studios David Stapf said. "Everyone here has great respect for this storied franchise, and we're excited to launch its next television chapter in the creative mind and skilled hands of Alex Kurtzman, someone who knows this world and its audience intimately."

This Star Trek series will follow the adventures of a new Federation crew, presumably within 2009's rebooted universe. According to CBS, the series is based around "seeking imaginative new worlds and new civilizations, while exploring the dramatic contemporary themes that have been a signature of the franchise since its inception in 1966". Star Trek will have a preview broadcast on television in January, followed by an exclusive US streaming run on CBS All Access.

While I personally enjoyed the 2009 reboot, getting back to Star Trek's sense of discovery and exploration is immensely exciting. These are themes far more suited to serialized formats than Paramount's latest films, allowing crews to actually study the final frontier instead of defending Earth from military threats. The only problem is that CBS' streaming service is a US-exclusive - there are many international Star Trek fans who will be disappointed by that detail.

Are you looking forward to a new Star Trek series? Share your thoughts in the comments!