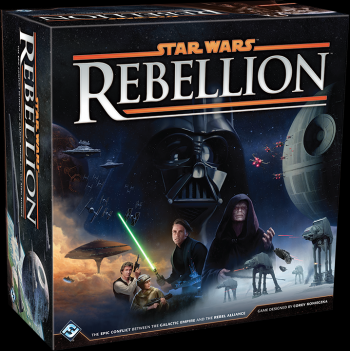 Fantasy Flight Games is rapidly approaching the point where I'd like to rename them "Star Wars Games". Seriously, this publisher's Star Wars line-up covers one tactical board game, two card games, two miniature games, and three interlocking tabletop RPGs. Thankfully, these are all critically-acclaimed, high-quality titles - so when Fantasy Flight announces yet another Star Wars product, players take notice. Today that announcement is for Star Wars: Rebellion, a board game where armies wage war across the entire galaxy.

"This is the Star Wars game I have always wanted to play, but couldn't because it didn't exist until now," Board Game Manager Steve Kimball said. "It has been a privilege developing this game alongside Game Designer Corey Konieczka. Rebellion's brand new, asymmetrical system offers deeply thematic gameplay, and we are excited to have players experience its rich, emergent narrative."

Star Wars: Rebellion is an attempt to blend the epic scale of galactic warfare with the personal heroism of individual units. Two to four players control the Rebel Alliance and Galactic Empire, moving armies across star systems and adding planets to your cause. But your forces are also led by iconic Star Wars characters - Princess Leia, Mon Mothma, Grand Moff Tarkin, and Emperor Palpatine each lend their unique talents to the war effort. These characters can also initiate secret missions inspired by the original trilogy. For example, Luke Skywalker can be sent to Dagobah for Jedi training, or Darth Vader could spring a trap which freezes Han Solo in carbonite.

That's great, but the tactical game board is what really interests me. Each side assigns units to planets they control, ranging from infantry, to Walkers, to starships, to the massive Death Star itself. (Both the original and Return of the Jedi editions are included.) Battles begin whenever two forces meet on the same planet, with more powerful units having a better chance of victory than weaker units. But don't be fooled - even individual soldiers have a slim chance to defeat powerful opponents, just like Luke Skywalker making a one-in-a-million shot on the Death Star's exhaust port.

Overall, this looks like an expanded and refined version of Star Wars: Battlefront's Galactic Conquest mode as a board game. If that appeals to you in any way, Star Wars: Rebellion will be worth checking out. The completed game is due to launch in Q1 2016.