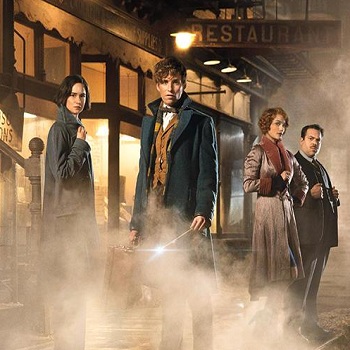 It's been over four years since the Harry Potter film series wrapped up with The Deathly Hallows: Part 2, which is usually more than enough time for Hollywood to begin rolling out the reboot machine. It would be hard to blame them -- the Harry Potter saga raked in over $7 Billion theatrically and is said to be worth over $20 billion (and counting) altogether, placing it second only to the Marvel Cinematic Universe on the list of highest grossing franchises.

But while no plans for a Harry Potter reboot seem to be on even the distant horizon, Warner Bros. did announce the next best thing a couple years back: A prequel trilogy ala The Hobbit based on Harry Potter creator J.K. Rowling's 2001 novel-within-a-novel, Fantastic Beasts and Where to Find Them.

In what will also mark Rowling's screenwriting debut, Fantastic Beasts will be directed by the man behind the last four Potter films, David Yates, and today, Entertainment Weekly has released the first photos from the set to give us a preview of what we're in for.

Beasts will reportedly be set in New York some 70 years before the events of the Harry Potter series, and will feature both an American wizarding school similar to Hogwarts and a visit to the Magical Congress of the United States of America.

Fantastic Beasts and Where to Find Them hits theaters on Nov. 18, 2016. Academy Award winner Eddie Redmayne (The Theory of Everything) will star as Newt Scamander, the "author" of Beasts, with Katherine Waterston (Porpentina "Tina" Goldstein), Alison Sudol (Queenie Goldstein) and Dan Fogler (Jacob Kowalski) co-starring.

Little else is known about Beasts, but for now, let us pray that Beasts will feature a guest appearance by the one magician who rules them all. No, not Harry Potter. You know who I'm talking about...

Related to:
jared jones, fantastic beasts and where to find them, harry potter, movies and tv, prequel
0
Tweet