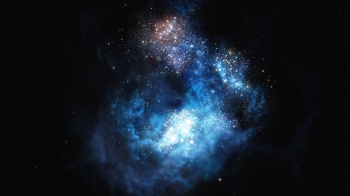 We have countless movies, TV shows, comic books, and video games preparing us for the notion that parallel universes exist and are easy to observe. In reality, while science has many ideas on the matter, it's proven difficult to settle one way or another. But that's not stopping potential evidence from flowing in - like one recent example from the Astrophysical Journal. A new study conducted by Caltech cosmologist Ranga-Ram Chary has found cosmic background radiation anomalies which are difficult to explain in normal circumstances. One possible solution? These are locations where our universe has collided with an alternate universe.

So yeah. Marvel's Secret Wars might be closer to how reality works than we thought.

For context, you need to understand cosmic background radiation. It's the oldest light in the universe, made up of leftover electromagnetic radiation from the universe's creation. At any given moment it hits the Earth from every direction, and we can now map it using data from the European Space Agency's Planck telescope.

Now for the interesting part: Chary created one such map and noted anomalous emissions of radiation in certain regions. These are basically blobs of light where the color looks wrong. And I don't mean "we need to repaint the kitchen" wrong - we're talking "this light doesn't come from our universe" kind of wrong.

To be fair, alternate universes aren't the only possibility here. Chary himself said this will require an immense burden of proof, adding that even noise fluctuations could alter the signal enough to cause the anomaly. One problem: The calculated probability for that being true is about 30%. Hence why we're talking alternate universes today.

These readings also line up with some current multiverse theories - specifically, those relating to pocket dimensions. In short, as our universe expands it creates energy pockets that expand more quickly than the surrounding reality, forming another dimension. In 2010, scientists considered the possibility that cosmic bruising in background radiation might be a sign of this process. Chary's study may just be the latest piece of evidence supporting this multiverse theory.

"Our Universe may simply be a region within an eternally inflating super-region," Chary writes. "Many other regions beyond our observable Universe would exist with each such region governed by a different set of physical parameters than the ones we have measured for our Universe."