Pre-ordering World of Warcraft: Legion will give you one week of exclusive early access to the new Demon Hunter class.

On the eve of BlizzCon, what was sure to be World of Warcraft's biggest announcements has been leaked via a pre-order banner image that briefly went live on Blizzard's official World of Warcraft page: the release date of Legion. World of Warcraft: Legion will launch "on or before" September 21, 2016, at $49.99 for the standard edition, and $69.99 for the digital deluxe edition.

Additionally, we also know what most of the game's digital deluxe and pre-order rewards will be: For pre-ordering the game, you'll get a level 100 character boost in a similar fashion to Warlords of Draenor, as well as exclusive early access to the expansion's new Demon Hunter class. 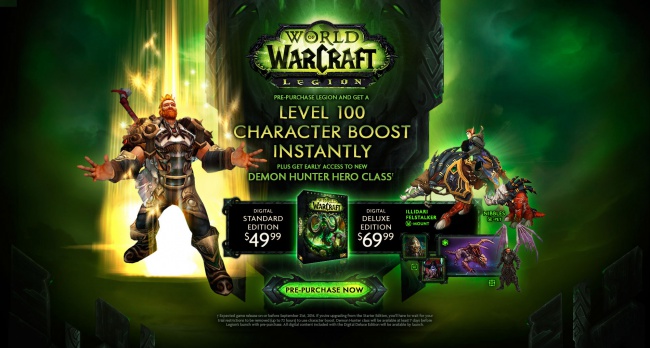 In the fine print of the banner, it explains that the Demon Hunter class will be available for at least one week prior to the game's official launch for anyone who pre-orders, is limited to one per realm, and is only available to players who already have at least a level 70 character.

As for the game's digital deluxe edition, we know it will contain an Illdari Felstalker mount and Nibbles mini-pet, as well as a collection of goodies for other Blizzard games, including StarCraft II portraits, a Heroes of The Storm mount, and Diablo III Demon Hunter wings.