Another leaked battle.net banner confirms that Overwatch will be a multi-platform title.

Oh dear. It looks like Blizzard has (accidentally?) jumped the gun on not just one but two of its big release date reveals we were expecting to hear at BlizzCon over the weekend. This time it has been revealed that Overwatch, Blizzard's TF2-meets-DoTA shooter, will release "on or before June 21, 2016", and what's more, it will be a multiplatform title, releasing simultaneously on PC, PS4 and Xbox One. 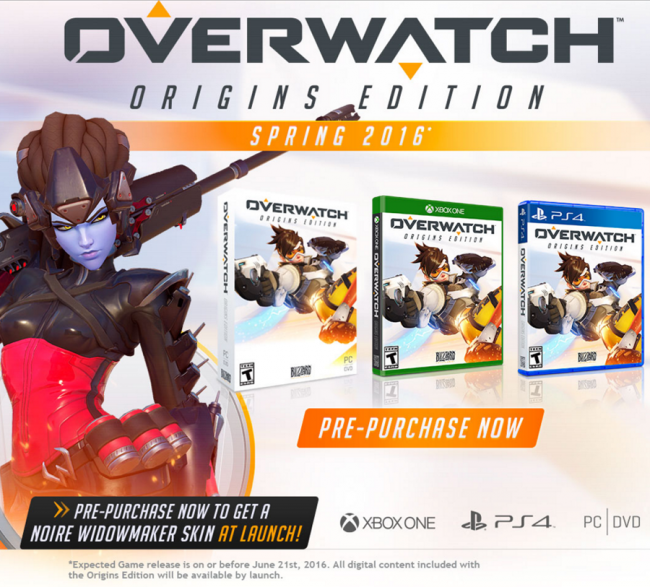 Additionally, Game UK also jumped the gun on putting up the product page for the Overwatch Origins Edition, revealing a bit more about what will come in the box. It will come with 21 heroes and 5 skins, as well as the following cross-game content:

So what can we take from this? Well, it doesn't entirely rule out the game being free-to-play, as the Origins Edition only mentions 21 heroes, suggesting that more heroes will be added later in the game's life, and that they will not be included for free. We could be looking at a kind of "Founder's Pack"-type deal, where paying some cash up-front gives you access to a whole bunch of heroes.

We've also learned that the game will feature League of Legends-style cosmetic skins, which further supports the free-to-play theory.

We should be able to clarify all of these things when BlizzCon kicks off this weekend.