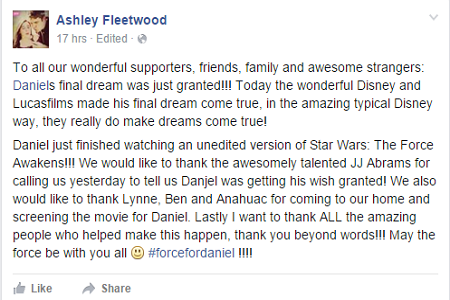 Terminally ill Star Wars fan Daniel Fleetwood was given a private screening of an unedited version of The Force Awakens.

Update: We're sad to report that Daniel Fleetwood has passed away as a result of his illness. His wife, Ashley, posted the following to her Facebook page yesterday:

"Daniel put up an amazing fight to the very end. He is now one with God and with the Force. He passed in his sleep and in peace. He will always be my idol and my hero. Please hug uncle Marc for me and give Lucy lots of kisses. Rest in peace my love."

Daniel's death has already resulted in an outpouring of support and condolences. Many individuals are also contributing to a GoFundMe campaign set up by Ashley to help cover the costs of his cancer treatment. It's already raised more than half of its 100,000 dollar goal.

Original Story: For many Star Wars fans, the weeks still left between now and the release of Star Wars: The Force Awakens have become almost unbearable. Even for the most hardcore however, it isn't a matter of life and death. The tragic exception to that rule is Daniel Fleetwood. Diagnosed in July with a rare form of cancer, doctors told him he had a mere two months left to live. While he would go on to defy their initial expectations, recent reports from his family have indicated that the cancer has continued to spread and that his time is running out. A huge Star Wars fan, it looked very much like he wouldn't make it to see the new film.

Hoping to rectify that, Fleetwood's family launched a Twitter campaign (#ForceForDaniel) to spread Daniel's story and hopefully convince Disney and Lucasfilm to let him see an early screening of the film. The campaign quickly gained momentum, eventually catching the attention of Force Awakens stars Mark Hamill and John Boyega, both of whom re-Tweeted the hashtag on their personal accounts. Catching wind of the situation Disney acquiesced and, earlier this week, Fleetwood received a phone call from director J.J. Abrams followed by a private screening of an unedited version of the film in his home. Fleetwood's wife Ashley shared the good news in a post on her Facebook page. "Today the wonderful Disney and Lucasfilms made [Daniel's] final dream come true," she said. "I want to thank ALL the amazing people who helped make this happen, thank you beyond words. May the Force be with you all."

Just speaking personally, this is one of those things those things that restores my faith in humanity a little bit. Granted, I'm a huge sap for this sort of thing, but I still think Disney, Lucasfilm and J.J. Abrams have earned some sincere kudos for their response to this. It might only be a small kindness in the grand scheme of things, but I'd be willing to bet that for Daniel Fleetwood it made a world of difference.

Star Wars: The Force Awakens will hit theaters next month on December 18th.