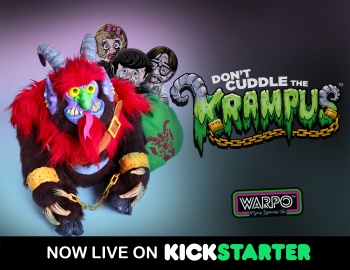 We're all familiar with Santa Claus, the festive Christmas benefactor who rewards good children with toys and merriment. But there's a dark flip side to that coin called Krampus, the Christmas demon. Inspired by pagan mythology, this chained creature was responsible for punishing the world's naughty children, which he did by whipping them with birch sticks or stuffing them into his bag for a late-night snack. For some reason, this charming personality is rarely represented by Christmas toys of his own. Thankfully, indie toy company Warpo plans to change that with a 1986-styled toy line Kickstarter called Don't Cuddle the Krampus.

"1986 was the year when monsters and gross-outs reigned supreme in toys," says Bryan Katzel, Warpo president. "When we decided to develop an 80s retro plush line, we knew Krampus would be the perfect beastly buddy to get the Warpo treatment."

Don't Cuddle the Krampus is a follow-up to Warpo's Legends of Cthulhu line, which was based on 1970s collectible toys. Don't Cuddle the Krampus moves that principle forward a decade, introducing 80s-themed toys and merchandise designed by Jim Groman (Madballs, Barnyard Heroes) and Donn Miranda (Care Bears, My Pet Monster). The full series includes a plush Krampus toy, a coloring book, a read-along Krampus storybook and cassette tape, wrapping paper, a deck of cards, and even a lump of Krampus coal.

Of course, the Krampus toy itself is the real joy. This 18.5" plush figure looks adorably snug while prominently displaying chains, fur, and fangs. Krampus also comes with three collectible "Naughty Kid" pillows which can be stuffed into his Naughty Kid bag. The design really pulls off Krampus' menacing nature while keeping an adorable plush design in mind. I attribute it to Krampus' big eyes, along with teeth which almost seem to form a chilling smile.

All told, Don't Cuddle the Krampus looks fantastic, and is giving me serious flashbacks of toys I used to see growing up. That should be more than enough to attract fans of Krampus' darkly charming appeal. Warpo's Kickstarter campaign launches today, seeking $70,000 to produce the toy alongside supplemental merchandise as stretch goals and add-ons.