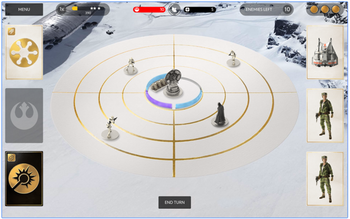 There's a disturbance in the (mobile) force.

Electronics Arts has released the free companion app for Star Wars Battlefront. The app lets you track progress and stats, displays the Star Cards, Blasters, and Credits that you've unlocked, and lets you customize your character.

In addition, the app includes Base Command, a strategic card game that pits the player against Imperial enemies. In this mini-game you can use your Star Cards from Star Wars Battlefront to compete in sieges in order to earn more credits. These credits can be used to purchase new Star Cards, Blasters, and more in the main game.

SW Battlefront Companion is available to download for free now for Android and iOS devices, and Base Command is also available on the Star Wars Battlefront website.

In other Star Wars Battlefront news, the live action trailer for the game, featuring Pitch Perfect star Anna Kendrick, was recently released. According to EA, over nine million people played the Star Wars Battlefront beta, logging around 1.6 billion minutes of collective play time. EA estimates that the upcoming shooter will sell 13 million copies by the end of March 2016.