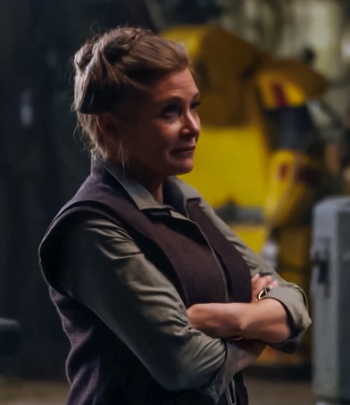 "She's referred to as General," Abrams said. "But ... there's a moment in the movie where a character sort of slips and calls her 'Princess.'" Feel free to guess who slips up and how Leia reacts. Personally, I suspect Private Link will regret his words.

Long-time Star Wars fans will probably have trouble separating Leia from her royal title, but it makes quite a bit of sense. "Princess" was a position Leia received on Alderaan, a role rendered unnecessary when millions of her subjects were suddenly silenced. (Too soon?) After parting ways with Luke, Han, and Chewie, Leia stayed in a leadership role, but gained an appropriate new title that demanded respect.

That's not to say the transition was easy. Fisher herself describes General Organa as "solitary. Under a lot of pressure. Committed as ever to her cause, but I would imagine feeling somewhat defeated, tired, and pissed." But Fisher still wants fans to take a strong message from this version of Leia: "Never give up."

Sounds like Leia may not have changed that much after all.