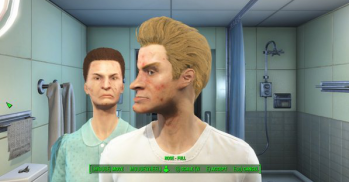 Complete with Beavis and Butthead.

Update: It is with a heavy heart that I must inform you all that the John Cena character appears to be a cruel photoshop hoax.

Original: Bethesda's highly anticipated Fallout 4 released on Tuesday, complete with some extremely nuanced character creation options. This has given gamers the option of meticulously tweaking their character's appearance before venturing out into the Wasteland.

However, some of you have gone far beyond beard trimming and mole-placing in order to create some incredible characters. Gamers far more patient than myself have created everyone from The Witcher's Geralt of Rivia to Beavis and Butthead, John Cena to Hitler, Assassin's Creed Unity's glitchy Arno to Obama, with a few nightmarish creations thrown in for good measure.

Check them out below!