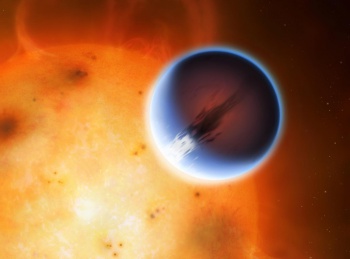 Scientists have, for the first time ever, mapped an exoplanet's weather. The result: wind travelling faster than the speed of sound, super-heated by a neighboring star.

Good news, everyone! The list of far-off planets that would definitely, positively kill us if we landed on them has increased by one. I'm no mathematician, but I think that means we're very close to finding a settler-friendly Earth 2. Law of averages, right?

The latest exoplanet to be stubbornly set against human habitation is one HD 189733b, a Jupiter-esque giant orbiting very close to its star. According to extrasolar meteorologists, winds whip around the planet at speeds reaching 5400 miles per hour, or about 2 kilometres per second. That's roughly seven times the speed of sound, back here on Earth.

Deadly as that is, the discovery and the research that led to is is pretty exciting: "This is the first ever weather map from outside of our solar system. Whilst we have previously known of wind on exoplanets, we have never before been able to directly measure and map a weather system," says Tom Louden, of the University of Warwick. The study is available here.

More from the Escapist on extrasolar planets.

Eventually, the researches hope to use the techniques they've developed to study hospitable planets. "As we develop the technique further we will be able to study wind flows in increasing detail and make weather maps of smaller planets. Ultimately this technique will allow us to image the weather systems on Earth-like planets."

See? One step closer to a nice off-world colony. I'm still eager for the day a scientist announces, "we found a planet, and it's not immediately deadly to humans! Hooray!"