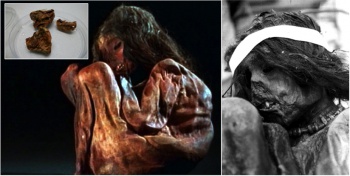 The DNA of an Incan mummy believed to have been a victim of sacrifice has been recovered, supporting hypotheses on the initial settling of South America.

Today in "news that could be a good set-up for a horror film", anthropologists have recovered DNA from a mummified Incan child, believed to have been the victim of human sacrifice over five centuries ago.

This is the first time that DNA from a Native American mummy has been sequenced, and the mitochondrial DNA from our boy is providing some interesting answers to very old questions.

The child's remains were discovered over thirty years ago on Argentina's Aconcagua, one of the tallest mountains in the world. The 7-year-old boy was a likely victim of capococha, a sacred ritual of human sacrifice.

Capococha was performed during or after troubling times - your earthquakes, droughts, deaths of emperors - and the sacrifice was usually the progeny of a chief or other important figure, selected for their physical perfection. The victim was brought up to a mountain's peak, where they were drugged or fed alcohol, and then knocked on the back of the head before being placed in a tomb along with material sacrifices or accessories for the deceased to carry into the afterlife.

What the mitochondrial DNA is able to show us is far back settlement in the Americas dates. The boy's unique set of mutations - or haplotype - not seen before or since in that combination, suggested to researchers that his ancestors had inhabitated the area for a very long time, at least as far back as 14,000 years, when they might have first come over from Beringia (the former land mass between today's Alaska and Russia).

So, now I've got a hankering for a top-tier horror flick about a frozen Incan mummy. This summer: Ice Mummy: Anything You Can Do Incan Do DEADER. Hollywood, call me!