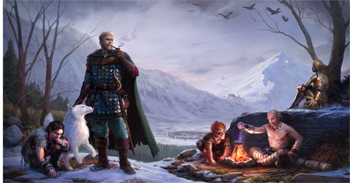 "The White March" to conclude early next year.

Obsidian Entertainment and Paradox Interactive have announced a release window for the next content expansion for Pillars of Eternity, "The White March Part 2." The DLC is expected to be available late January 2016.

This expansion will add new quests and abilities, a Barbarian companion character, and bring to conclusion the story began in the first part of "The White March" back in August. The DLC will also raise the game's level cap and introduce a new "Story Time" mode described in a press release as, "letting players experience the incredible narrative of Pillars of Eternity at a faster pace."

Pillars of Eternity is the product of a successful crowdfunding campaign by Obsidian Entertainment in 2012, which raised over $4 million to develop a game which drew design inspiration from classic computer role-playing games such as Baldur's Gate and Planescape: Torment. The game released in March of this year to generally positive reviews, including a rating of 5 stars from The Escapist's Justin Clouse who praised the level of freedom given to the player in crafting the narrative.