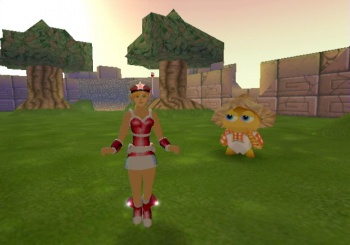 Let's say you've just finished GoldenEye, the first great console shooter, and now must decide what to make next. While Rare ultimately went on to produce Perfect Dark, developer Martin Hollis wanted to try something a little different. So he left Rare and started an experimental indie studio called Zoonami, whose first planned title was Game Zero. Sadly, the game was considered too hardware intensive for GameCube-era consoles and eventually cancelled in 2002. The good news? Hollis has finally revealed screenshots of Game Zero's prototype, giving us a clear idea of what might have been.

Game Zero would have been set on a fantasy world inhabited by strange yellow aliens. Players controlled a female protagonist as she explored a sandbox world, fought enemies with laser guns, and create new buildings in the surrounding environment. This is where a few Minecraft comparisons come into view - the entire world was rendered with cartoonish style using simple voxel graphics, and the player could mine terrain for resources to build new structures. Even Hollis has acknowledged the connection while stating the two games aren't connected.

"Ancestor isn't quite the right word," Hollis told Unseen64. "After all I believe nobody connected to Zach of Zachtronics (Infiniminer) and to Notch of Mojang saw any part of Game Zero. There's a connection. Minecraft has created its precursors."

Worldbuilding aside, Game Zero planned to integrate elements from console platformers into its voxel setting. "At the time we stopped the project, we had developed a handful of levels with something of a platformer feel," Hollis told Unseen64. "The avatar and vehicles had antigravity movement mainly constrained to the ground, and the player discovered their goals were to navigate, to rescue a few characters from the level, and to collect items partly from the rock. The levels were fairly tightly circumscribed in space, much more like Mario 64 than an open world game."

Of course, Game Zero obviously never saw its planned console release. The voxel destruction and creation process was uncomfortable RAM-intensive for GameCube hardware, especially considering the sandbox environments. On top of that, the GameCube's biggest success stories still followed traditional gameplay mechanics. Game Zero was a little too experimental alongside Resident Evil, Super Mario Sunshine, or Metroid Prime, so Zoonami decided to cancel it shortly after producing a prototype.

Back when Minecraft became a success, some noted the game couldn't have succeeded in a Triple-A market. Now that we know about Game Zero, it seems that assessment was more on-the-nose than we'd originally thought. Thankfully the growing indie space has allowed games like this to thrive today.

All the same, do you wish Game Zero had seen a GameCube console launch? Share your thoughts in the comments!