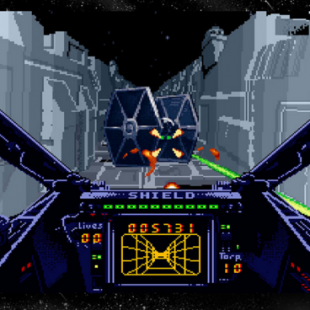 The SNES classic Super Star Wars is now available on PS4 and Vita with expanded content including new save features, leaderboards and more.

Star Wars: Battlefront released yesterday and already countless gamers have spent dozens of hours blasting their way through epic battles based on famous moments and locations from the Star Wars universe. As big and exciting as that release was however, yesterday also played host to another Star Wars release that could prove equally thrilling to franchise fans and retro gamers alike. Releasing quietly alongside its current-generation sibling, the SNES classic Super Star Wars has now joined the PlayStation library as a digital download.

Originally released in 1992, Super Star Wars was the first entry in a trilogy of 16-bit platformers based on the original Star Wars films. The games ran players through game-ified versions of the movies and even included some nifty Mode-7 space battles. The entire trilogy was re-released to the Wii's Virtual Console a few years ago. The version of Super Star Wars coming to the PlayStation Store is cross-playable on PS4 and Vita (no PS3 version, sadly) and boasts a slew of new features including "new save features, leaderboards, trophies, and updated display and controller options." It costs $9.99 and requires 40.3MB of open hard drive space.

What remains to be seen is whether or not we'll be receiving updated versions of Super Empire Strikes Back and Super Return of the Jedi. Speaking personally, I would eat up the opportunity to play these on my Vita, especially with new save options. These games were not easy and the idea of being able to work my way through them without having struggling with some cumbersome passcode system sounds amazing.