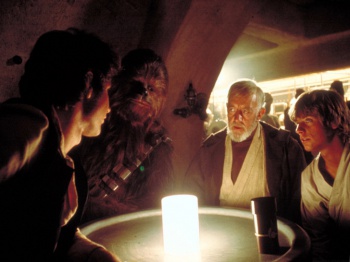 It's been ten years since Star Wars Episode III: Revenge of the Sith. It was 15 years between Episode VI and Episode I. How long will it be between The Force Awakens and the next Star Wars movie, Rogue One? Just one year. How about the one after that? Also one year. In fact, Disney plans on releasing a Star Wars movie every year for... well, as long as people keep buying tickets for them.

"If the people at the Walt Disney Company, which bought Lucasfilm for $4 billion in 2012, have anything to say about it, the past four decades of Star Wars are merely prologue," writer Adam Rogers wrote in a feature on Wired magazine. "They are making more. A lot more."

"A lot more" to the tune of one every year for as long as they can. In fact, Rogers thinks that Disney will milk Star Wars so hard, and for so long, that if you were alive when A New Hope launched back in the 70s, you'll probably be dead by the time they stop making new ones.

Reportedly, the company plans on achieving this gargantuan level of production by branching out Star Wars films Marvel Universe-style, with lots of stand-alone films focusing on different aspects of the universe. Indeed, next year's Rogue One is exactly that.

So, if you have hopes for characters and settings from the Star Wars expanded universe, you may one day see them gracing the silver screen in one of many, many planned Star Wars spin-offs. My fingers crossed for a full Knights of the Old Republic feature!