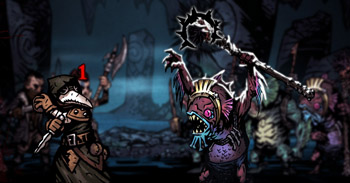 Red Hook Studios has announced work on a PlayStation 4 and PlayStation Vita port of punishing dungeon crawler Darkest Dungeon. In a post on PlayStation Blog, Community Manager John Lindvay announced the port and provided a release window of Spring 2016. The PS4 version will be shown publicly for the first time at the PlayStation Experience event in San Francisco next month.

Darkest Dungeon is a turn-based dungeon crawling RPG with challenging party management mechanics. As characters in the adventuring party explore the dungeon beneath the player's ancestral home, they develop psychological and physical ailments. Players must balance the well-being of their adventurers against the need to complete ever more challenging missions in the randomly-generated dungeon.

The game is being independently developed by Red Hook Studios, financed by a successful Kickstarter campaign in October 2013 which collected over $300,000. A PC version has been available in Steam Early Access since February of this year, with the final release on PC scheduled for January 19, 2016.