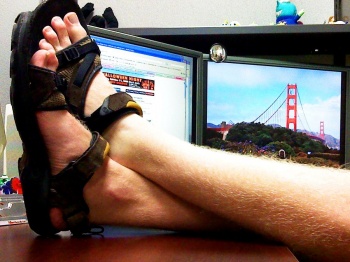 After leaving his job, a programmer's co-workers realized he'd left behind scripts that automatically completed several daily tasks for him.

We all have repetitive tasks in our jobs that we wish could just be taken care of automatically. That's one advantage of working in a computer science field - you can create scripts to do that for you. Except one unnamed programmer may have taken the process a little too far. After he left for a new company, his co-workers discovered scripts for most elements of his job: Things like database fixes, email replies, and automatic sick notices if he wouldn't be making it to work. This guy even hacked into the coffee machine so it could make him lattes while he walked to the breakroom.

These scripts were all uploaded to GitHub by Nihad Abbasov after he discovered them among the programmer's work. "If something - anything - requires more than 90 seconds of his time, he writes a script to automate that."

What kind of scripts are we talking about here? Well, apparently this programmer received frequent emails from a particular customer he didn't like (denoted by a script named "kumar-asshole"). So his script checked for the words "help", "trouble", and "sorry" before automatically rolling his database to the latest backup. It even sent a reply: "No worries mate, be careful next time."

But that's not all. He created a script which generated "late at work" text messages for his wife, picking from a list of predetermined reasons if his login was still active after 9 pm. Another script emailed his co-workers to say he'd be working from home if he wasn't logged in by 8:45. (Interestingly, that script is titled "hangover".)

But perhaps the most surprising script is his coffee machine hack, which waits 17 seconds, orders a latte, then waits another 24 seconds before pouring it into a cup. It turns out that's the amount of time needed to walk from his desk to the coffee machine. Meanwhile, the rest of the company had no idea it was hackable, let alone on the network.

This is all pretty hilarious, but raises an interesting philosophical conundrum: If a programmer creates scripts to complete his work for him, does that still technically mean he's doing his job?