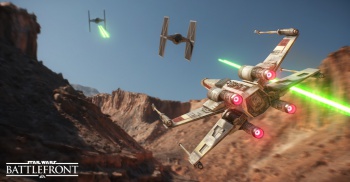 Battlefront sold more than all of the other games in the top five combined.

There's a stereotype that western games, and in particular, western shooters are a joke over in Japan, and sell very poorly. But just like most sterotypes, it is actually quite far from the truth. In fact, games like Battlefield and Call of Duty consistently do well in the land of the rising sun, and EA game's latest Battlefield re-skin: Star Wars Battlefront has done absolutely gangbusters, topping the software sales charts by an insane amount.

Battlefront moved a whopping 124,000 units this month, and managed to boost the hardware sales of the PS4 just enough to finally overtake the 3DS. For comparison, the number 2 game: Atelier Sophie: The Alchemist of the Mysterious Book sold just 30,000 copies, and all of the other games in the top five combined only add up to 100,000 copies sold.

Western games have been steadily gaining ground in Japan over the last few years, and considering how popular Star Wars is over there, it should come as no surprise that Battlefront sold well. Reportedly, many Japanese reviewers have praised the third-person camera, as Japanese gamers much prefer to be able to see their avatar while playing.