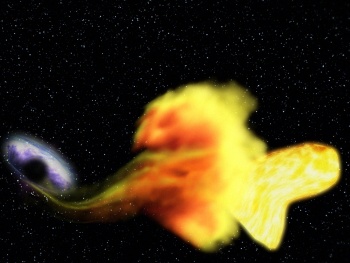 An international team of astrophysicists have watched a supermassive black hole consume a star and eject high-speed plasma for the first time.

For all the research articles written about black holes, the truth is we rarely see them in their full destructive glory. But we're also paying more attention than ever before, meaning it's just a matter of time before catching a black hole mid-meal. Such an event has finally occurred, as researchers watched a supermassive black hole devour a star before belching out a flare of plasma moving at almost the speed of light.

"These events are extremely rare," John Hopkins fellow Sjoert van Velzen exlained. "It's the first time we see everything from the stellar destruction followed by the launch of a conical outflow, also called a jet, and we watched it unfold over several months."

Astrophysicists have believed that when black holes consume gas, plasma is ejected with enough force to escape the event horizon. The problem was this phenomenon had never been directly observed. That changed when Ohio State University first observed this star falling into a supermassive black hole in Dec. 2014. A team of researchers led by the University of Oxford in Great Britain's Rob Fender directed radio telescopes to capture the event, from orbital decay to its destruction. The team's results were published in the academic journal Science yesterday.

"The destruction of a star by a black hole is beautifully complicated, and far from understood," van Velzen continued. "From our observations, we learn the streams of stellar debris can organize and make a jet rather quickly, which is valuable input for constructing a complete theory of these events."